Foodbanks in Waterloo and Sherborne are sharing the proceeds from a carol concert on the concourse of Waterloo Station by school choirs from the North Dorset town. 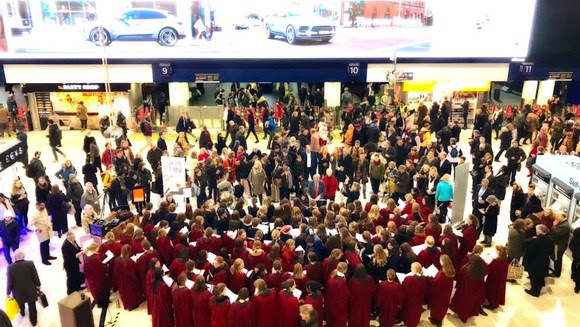 The combined choirs, numbering over a hundred with girls and boys aged between 11 and 18, serenaded shoppers and commuters with festive favourites in a bid to raise funds for food bank charities in Sherborne and Waterloo on Wednesday evening.

"The response from commuters and station staff was amazingly supportive," said John Jenkins, director of music at Sherborne Girls.

"The whole concourse echoed to traditional carol singing and we are certain that commuters continued their journey with their spirits raised."

Val Mizen, head of music at the Gryphon School, added: "The pupils performed beautifully together, and they did a marvellous job of representing Sherborne town.

"We are also so pleased to be able to raise awareness of the food bank charities and highlight the essential work they carry out."

Waterloo Foodbank's Rebekah Gibson said: "At Waterloo Foodbank we have loved working in partnership with Sherborne Foodbank, to raise money to support people in crisis this Christmas. We were amazed at the generosity of the public and the fantastic choirs that made this event such a success!"

After two hours of singing, the amount raised from passers-by and train commuters totalled more than £3,800, which is a magnificent result and will be shared between the Sherborne and Waterloo Foodbanks.

There will be a further opportunity for passengers at the railway station to support Waterloo Foodbank on Monday 17 December when local churches and groups stage a 12-hour carolathon from 7am to 7pm.

Last December Waterloo Foodbank provided food for 350 local people – including 166 children – and expects to be even busier this month.

Find out about the foodbank's Christmas appeal here.