Kate Hoey MP has performed the topping out ceremony of the Coin Street Neighbourhood Centre. 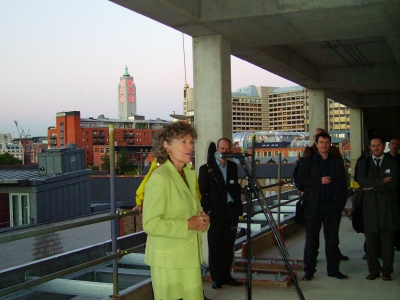 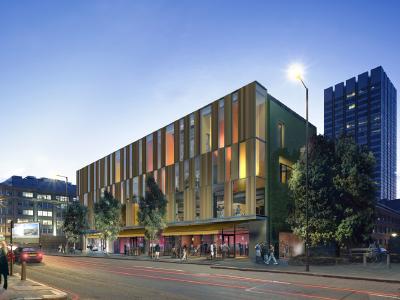 Visualisation of the completed Neighbourhood Centre

Guests gathered on the top floor just before sunset on Thursday to enjoy panoramic views of the Oxo Tower and Coin Street's pioneering housing developments.

The new Neighbourhood Centre is on the corner of Stamford Street and Coin Street. Immediately to its north is the Iroko Housing Co-operative which was designed by the Centre's architects Haworth Tompkins.

The development will also include a family & children's centre [currently at 99 Upper Ground], meeting and conference facilities, a learning and enterprise support centre, a community cafe and a restaurant.

Kate Hoey praised the successful funding for the building. More than Ł5 million of the cost of the development has been raised by Coin Street Community Builders, with the remainder coming from the Single Regeneration Budget, London Development Agency and Children's Centre/SureStart programmes via Lambeth and Southwark Early Years.

The Lambeth MP said that she looked forward to returning for the opening in September next year.