Incoming Mayor of Southwark Bob Skelly thanked colleagues for giving him "a second chance to serve" as he took office despite protests outside the meeting and a walk-out by opposition councillors. 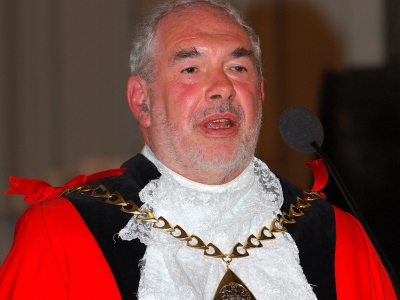 Cllr Bob Skelly, who represents Grange ward, resigned as executive member for education in 2004 after he made a controversial joke about the educational performance of black youths in Southwark.

His nomination as Lib Dem candidate for Mayor of Southwark provoked strong criticism from Labour councillors and the Mayor of London, Ken Livingstone.

Placard-waving protesters from the Level Up Youth Forum gathered outside the mayor-making ceremony at St Giles Church in Camberwell on Wednesday night.

Councillors voted to appoint Cllr Skelly as the borough's First Citizen for the coming year. He beat Labour nominee Cllr Tayo Situ by 32 votes to 30.

Labour councillors walked out of the church when Cllr Skelly was declared the winner.

"Three years ago, in a council committee meeting, I made a stupid remark," Cllr Skelly began his acceptance speech.

"That was to my eternal regret. I apologised for it at the time and I do so again. But I've always believed that actions speak louder than words. I am delighted that I have now been given a second chance to serve."

He added: "I want, during my year in office, to show my commitment to helping young people in Southwark achieve their potential and to convince both residents and outsiders that Southwark has far more that is positive about it than they might expect simply from reading the front pages."

Cllr Skelly has named the Damilola Taylor Trust as his mayoral charity for the coming year and aims to raise Ł50,000 to support their work.

A Liberal Democrat councillor for the Grange ward in Bermondsey since 2002, Cllr Skelly, 61, has over 30 years' experience in education as a teacher, school governor and trade unionist.

He also served as a governor at Geoffrey Chaucer School for 15 years, holding the position of chair of governors for six of these.

Cllr Skelly is a director of the Unicorn Theatre and a trustee of Southwark Young Pilgrims, Cooltan Arts and Southwark Cathedral Education Centre.

He has recently signed up to become a volunteer reader in a local primary school and has challenged Southwark's other 62 councillors to do the same.

The choice of Cllr Skelly as Liberal Democrat nominee for mayor was strongly opposed by Southwark's Labour Group.

"I firmly believe that Cllr Skelly is simply not a suitable person to be the First Citizen of a borough as diverse as Southwark," wrote Labour leader Cllr Peter John on his blog.

"In this year when we commemorate the 200th anniversary of the abolition of slavery in this country, it is monstrous that the Lib Dems have chosen as their candidate for mayor a councillor who has made such insensitive remarks."

Cllr Kyriacou has been chosen by the Lib Dem group as their nominee to be the new chair of Bermondsey Community Council.

If – as expected – he is elected by the Council Assembly next week, he will take over from Cllr Linda Manchester who is stepping down to concentrate on her role as chair of the Licensing Committee.

"My two highest priorities as the new chair of Bermondsey Community Council will be reaching out to people who are not currently involved in local government and the redevelopment of the Blue," says Cllr Kyriacou.

"I am determined to make our Community Council accessible and of interest to local residents. I will be looking to hold meetings at times that people can attend and to engage people in different ways. I am particularly keen to reach out to younger people."

Outgoing chair Cllr Linda Manchester, who took over from Cllr Beverley Bassom last year, said: "I have had a very enjoyable year as chair of the Community Council and I'm pleased that the position will be in safe hands. I have sat on more than 50 licensing panels in the past 12 months and this number is likely to increase because of the extra responsibilities of dealing with gambling licenses. It is with regret that I have therefore decided to hand over the reins in Bermondsey."