Wildlife minister Huw Irranca-Davies helped to clean up the Thames foreshore near Jubilee Gardens on Thursday to launch a new photographic competition. 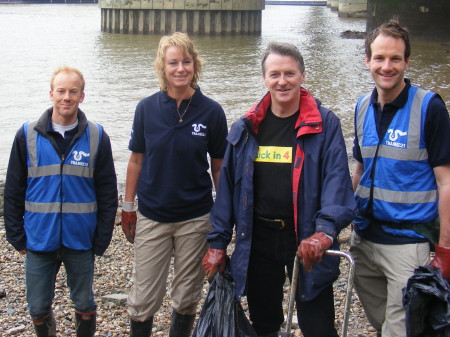 "I'd encourage anyone to have a go at conservation volunteering – you could be doing anything from clearing a pond, building a dry stone wall or footpath or making a bird house," says Huw Irranca-Davies MP.

"While you're out doing your bit, getting some fresh air and getting active, why not take a photo to capture your experience and enter it into our competition?

"You don't need to be an expert photographer to take part – just take a picture that sums up the fun you had helping to conserve English wildlife or nature."

The minister helped to clean up the South Bank beach just days after a similar clean-up on the same stretch of foreshore by managers from Marriott hotels.

The hotel staff found several curious items including a policeman's wallet, false teeth, a 150-year-old clay pipe, a ring and other items of jewellery.

Both events were arranged by Thames21 which provides regular opportunities for members of the public to help keep London's waterways clean such as this event at St Saviour's Dock in February.

The competition, which launches Defra's MuckIn4Life campaign, is open to anyone living and undertaking conservation volunteering in England. There are prizes of vouchers to be won in several categories and there will be one overall national winner and one overall under 16 years winner as well as regional winners around the country. Winners will also have their photos displayed in a public exhibition at Kew Gardens.