Turner Prize-nominated artist Mark Titchner has created a giant banner bearing the text "nothing for myself that is not also for others" that will be displayed on the wall of the Art House at Cathedral School in Redcross Way. 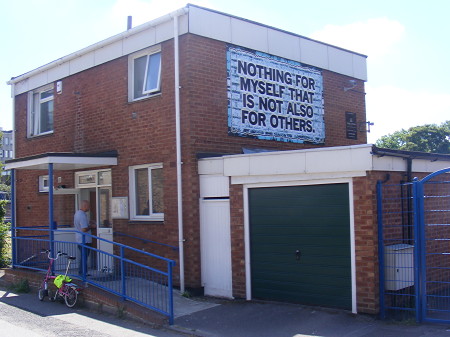 The Art House is a gallery and education space that has been created in the disused caretaker's house at Cathedral School in Redcross Way.

The work is called 'Motto (Part 1)' and is intended to provide a thought-provoking message for school pupils, local residents and passers-by.

"It's a piece that was design specifically for the house," says Mark Titchner, who explained that the words were drawn from a Buddhist text. He sees the piece as a response to our consumerist society.

"I was looking for something which on one hand seems aspirational in terms of an approach to the world but also slightly edgy.

"I'm happy to find texts anywhere. I don't mind about sources. I tend to look for a certain kind of phrase. I don't like to use language that is too complicated.

"I like the language to be readily understandable, even if the message itself is quite complicated. I try to avoid long, complex words.

"The form of the poster is based on the Saatchi & Saatchi 'Labour isn't working' advert for the Conservative Party which was voted as the most successful ad campaign of the last century. It has the same border and uses the same kind of font."

• Motto (Part 1) will be displayed on the wall of the Art House for the next five years. It has been commissioned by Art House Foundation and sponsored by Webber Street estate agents Young London.