Mayor of London Boris Johnson has said that he is "not closed-minded to the idea" of renaming Blackfriars Station as Blackfriars & Bankside when its new entrance opens on the SE1 riverside. 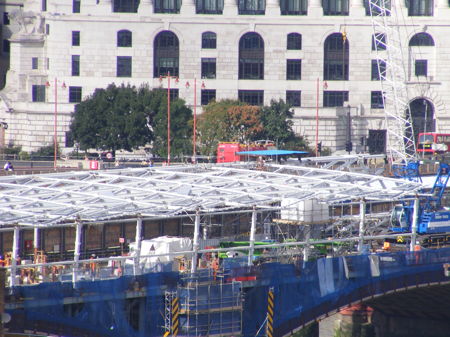 In August we reported the call for the station to be renamed to reflect the fact that – when Thameslink Programme works are completed – the station will span the Thames and serve more than one locality: Blackfriars in the City of London and Bankside in Southwark.

The campaign to rename the station has been led by Simon Hughes MP and London Assembly member Caroline Pidgeon.

Caroline Pidgeon tabled a question to the Mayor of London asking whether the Mayor would be supporting the proposal and whether he would make representations to Network Rail.

"I am not closed-minded to the idea but can think of at least one problem: Blackfriars tube station will not span the river and yet will share an entrance with the new Thameslink station on the north side of the Thames," said Boris Johnson, who is also chair of Transport for London.

"Of course, TfL and I will consider carefully any suggestions."

Better Bankside is currently running an online poll to gauge support for the name-change. At the time of writing 62 per cent of respondents were in favour of the change and 38 per cent against.