Network Rail has named WSP as the lead designer for the rebuilding of London Bridge Station, just days after the Government confirmed that the Thameslink Programme will go ahead in full. 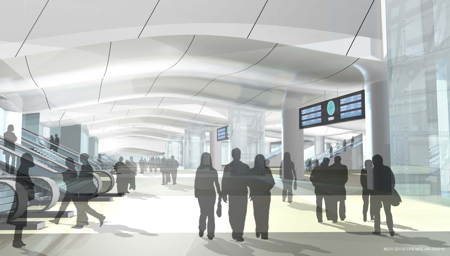 Network Rail says that the station will be completely rebuilt to create more space for passengers with additional concourse space below the platforms at street level.

The track layout will also be radically changed and the signalling renewed to accommodate high-frequency services on the Thameslink route through the station.

The 16-month contract will see WSP take the current scheme for the station building through outline design to the build phase due to begin late in 2012.

The plans for the station, due for completion in 2018, include an entirely new concourse, more space for passengers, better interchange between trains, buses and other modes of transport, and more capacity for longer more frequent trains to use the station.

"We're confident that the design we are taking forward is the best possible solution in terms of operational capacity and affordability," says Martin Jurkowski, project director for the second phase of Thameslink works.

"The next challenge is to take this design through the planning process, and to deliver a station that meets the needs not just of London's transport network, but of the surrounding area."

Dave Darnell from WSP said: "We are delighted to be appointed as lead designer for London Bridge station and look forward to working with Network Rail to transform the station into a flagship transport interchange.

"This project has particular significance for WSP in adding a further dimension to our involvement in the revitalisation of the area around London Bridge, which includes the Shard, London Bridge Place and the bus station projects."

Jacobs Engineering will complete the outline design of the railway systems elements including track, signalling, telecoms and associated power supplies.