The reintroduction of Thameslink train services between Blackfriars and London Bridge has moved a step closer with the completion of new track and signalling. 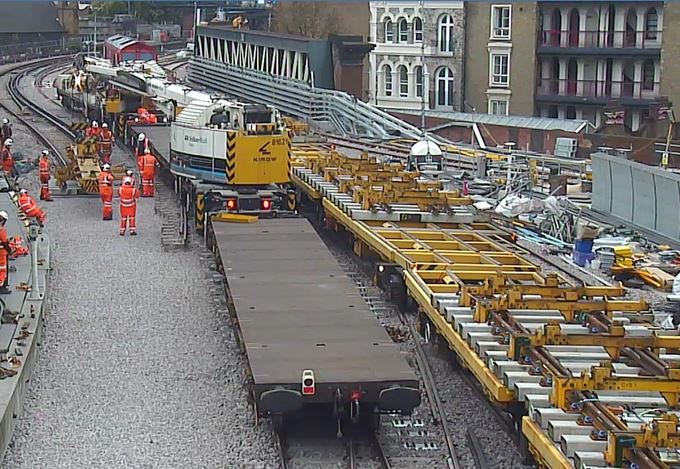 From May 2018, Thameslink services will once again call at London Bridge after a hiatus of three years for the rebuilding of the station.

Since 2015, trains on the Bedford to Brighton line have been diverted via Elephant & Castle, travelling at slow speeds on the congested suburban tracks of south London, adding 15 minutes to journey times.

With the completion of this track, to the west of London Bridge, the lines are now in their final position through the new station, awaiting final signalling commissioning at Christmas and the New Year.

Once drivers are trained and familiarised with using the new section of track and its signalling, Thameslink services will once again serve the new station, in the next major industry timetable change of May 2018.

The tracks will be brought into use after ten days of major service changes over Christmas and New Year, during which major re-signalling will take place around London Bridge and the final section of the brand new concourse and final five new platforms will open to passengers.

From 23 December until 1 January there will be significant closures affecting Southeastern, Thameslink, Southern and Gatwick Express services.

Mark Somers, project director for railway systems, Network Rail, said: "With the completion of the track on the western approaches to London Bridge, the final track layout is now in place for the reintroduction of Thameslink services to Blackfriars and awaiting final signalling commissioning which will take place over the Christmas period.

"The completion of this section of track is a huge milestone for the Thameslink Programme, which from 2018 will result in more frequent, more reliable services to more destinations and a fully rebuilt, entirely accessible London Bridge station fit for the 21st century."

George McInulty, service delivery director for Govia Thameslink Railway, said: "Cross-London Bedford-Brighton Thameslink passengers have not had any trains to London Bridge station since January 2015 when their services were diverted on an alternative route to make space for London Bridge to be rebuilt.

"From May, we'll be back at the station cutting journey times for thousands of passengers travelling to this part of London.

"At the same time we will expand the Thameslink network massively, connecting Peterborough and Cambridge into the north-south, cross-London route, transforming the journeys for thousands of people. This is a major part of our programme to modernise the railway through the government-sponsored Thameslink Programme and address the huge growth in passenger numbers across the South East."

As the railway reopens in the New Year, passengers at London Bridge will be greeted by the remaining section of the brand new concourse and newly completed platforms 1-5.

Southeastern services will operate on a new timetable and Southeastern trains to and from Cannon Street will once again stop at London Bridge, meaning that tickets will no longer be accepted on alternative TfL routes.

It is 10 years since work began on the Thameslink Programme to improve north-south rail links through London, including rebuilt stations at Blackfriars and London Bridge.