Solar panels to span the Thames at new Blackfriars Station

The new Blackfriars Station will generate up to 50 per cent of its own energy needs on-site thanks to the largest single use of solar photovoltaic cells in the UK. 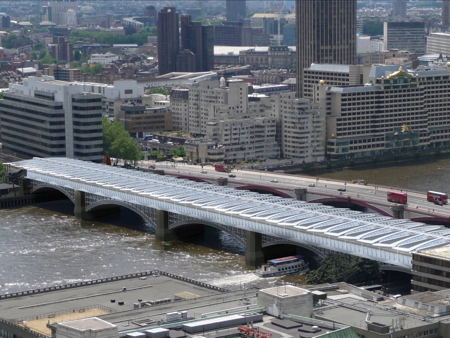 "As a business we recognise the challenges of climate change and have a responsibility to consider this in the planning, construction and delivery of significant rail projects," says Simon Kirby of Network Rail.

"The use of PV cells on the landmark London Blackfriars redevelopment is a major step that underlines our commitment to meeting this challenge.

"Not only will it help reduce our overall carbon footprint, but it is also an important benchmarking exercise which will allow us to better understand and measure over time the benefits of this technology and its future application."

As well as the solar panels, the Ł550 million redevelopment of Blackfriars Station also features sun pipes, rain harvesting systems and thermal insulation to decrease its reliance on other infrastructure such as water and electricity networks.

The panels are expected to generate more than 1 Megawatt of renewable energy at peak output. The scheme costs Ł7.3 million and is sponsored by the Department for Transport's safety and environment fund.

• Network Rail has teamed up with Bankside Gallery to launch the second round of the 'London Lives' art competition. This year artists have the opportunity to create an image to be displayed in the new southern entrance to Blackfriars Station.