The Elephant & Castle is "clearly not safe enough" for cyclists, according to Transport for London board member Steve Norris. 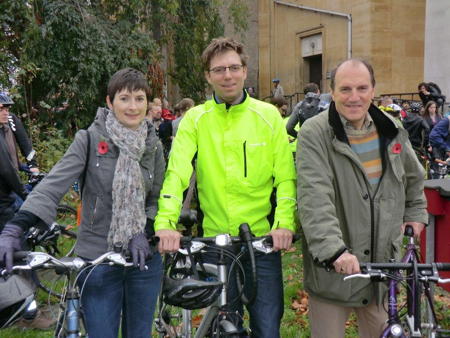 Steve Norris, who twice stood as Conservative candidate for Mayor of London, was appointed to the TfL board by Boris Johnson.

His remarks stand in stark contrast to the Mayor's own view about Elephant & Castle. This week Boris Johnson told the London Assembly that cycling round the Elephant gyratory is "fine ... if you've got your wits about you".

Mr Norris was speaking on LBC 97.3 on Saturday morning whilst standing in for David Mellor as Ken Livingstone's co-presenter.

On Saturday morning hundreds of riders gathered at Oval to embark on the ride organised by cycle bloggers to highlight the dangers faced by cyclists on the capital's roads.

"I read that list of the places you visited and they are clearly the places we've got to be making some real effort to deal with," said Mr Norris.

"I understand exactly what you mean at Elephant. I used to cycle through Elephant when I lived in Camberwell myself and it was always dangerous."

He added: "Everybody's been trying to humanise the Elephant but ... it's clearly not safe enough.

"I agree with you, it's a real priority for us. Isn't it true that the one thing that puts people off cycling is that they say 'it's not safe enough'?

"We've got to make sure that we eliminate that so that more people can get on their bikes and lower our carbon emissions, humanise themselves, make themselves fitter and so on."

Mr Norris also echoed Caroline Pidgeon's call for a review of the Mayor's existing Cycle Superhighways before any more are built.

"I'm a huge supporter of more cycling in London … but I do think that we've got to look at the Cycle Superhighways and make sure they really are safe," he said.

"I rather agree that we might as well do that before we build any more of them."