Stoney Street crater to be fixed on Friday morning

Southwark Council says Stoney Street should reopen on Friday morning after council officers and contractors have spent two days investigating the sudden appearance of a large hole in the road surface. 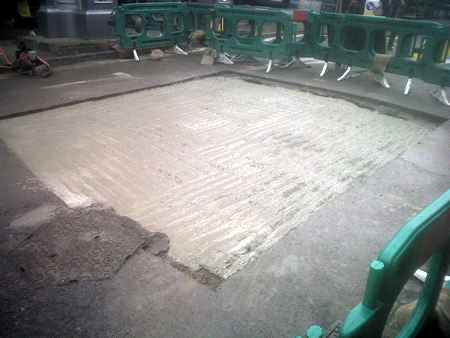 Although the crater was initially blamed on a collapsed sewer, council officers now believe that a combination of subsidence and pest damage could have caused the hole to appear.

Thames Water carried out a camera survey of their sewers on Wednesday night which found their main system under the road be intact.

Contractors have now laid a combination of type 1 cement and concrete in the hole.

"This will need time to cure," explained a council spokesman.

"We will be tarmacing the road at 8am tomorrow [Friday] morning, followed by reinstallation of the road markings, and the road should be open by 11am.

"We have signs out advising the public that the concrete is curing."