London's Swiss Church has celebrated its 250th anniversary with a service at Southwark Cathedral. 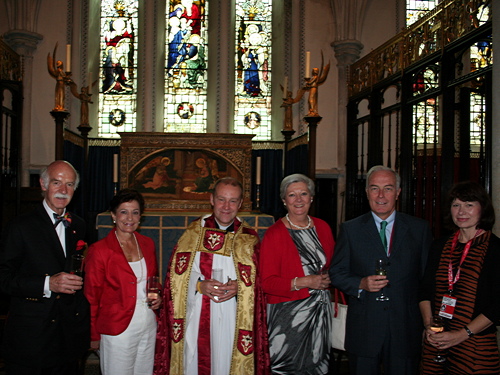 The Dean of Southwark, Very Revd Andrew Nunn, with guests at the service including Anton Mossiman and the Swiss ambassador 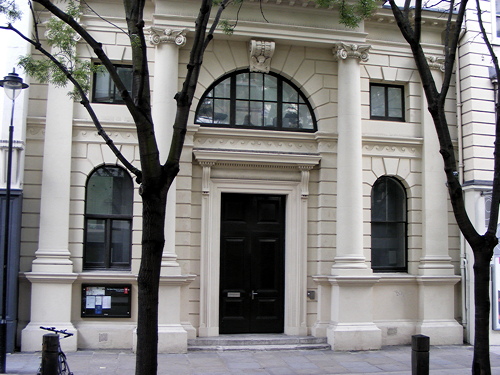 The Swiss Church in Endell Street

The church in Covent Garden chose Southwark Cathedral as the venue for Saturday morning's service due to the presence of the House of Switzerland in the cathedral's courtyard during the Olympic Games.

London's Eglise Helvétique was established near Leicester Square in 1762 by French speakers from Geneva, Vaud and Neuchâtel. The present Eglise Suisse in Endell Street was built in 1855 and has a congregation of German as well as French speakers.

The Swiss Church is affiliated to the Federation of Swiss Protestant Churches in Berne but the anniversary service was ecumenical in accordance with its policy of welcoming Swiss members of other denominations who are in London.

Swiss Church minister Nathalie Dürmüller, in her sermon, spoke of overcoming barriers between churches and striving for a common dialogue.

“We are very grateful that we can celebrate this 250th anniversary service at Southwark Cathedral, which is such a historic place in London," she said.

"It is important to maintain this ecumenical relationship, which has been established at this time by the House of Switzerland, and we look forward to continuing this partnership in the years to come."

Dean of Southwark Andrew Nunn, in welcoming the House of Switzerland and the Swiss Church, said that London Bridge was once the only bridge and so both the gateway to London and a place of welcome.

“It has been very good to welcome to Southwark members of the Swiss community and especially those who are living in London. The Swiss church has played an important role in the life of our city for 250 years, and it further cements our relationship in sharing in this celebration.”

He hoped that when the Swiss 'red road' was rolled away there would be a lasting relationship with the sister church of tolerance, openness, peacefulness and respect for all.

The opening prayer was read by Elsbeth Baxter, head of development at the Swiss Embassy, who has been liaising with Bankside residents over the last two years.

The lessons were read by Swiss Ambassador Anton Thalmann and Swiss Church consistoire member Philip Maillardet. The hymns were sung in French, German and English and the organist was Peter Yardley-Jones from the Swiss Church.

A collection was taken for the Manna Centre which works with the homeless in the Borough and Bermondsey.

The congregation included Swiss chef and restaurateur Anton Mosimann and his wife Kathrin.