The House of Switzerland at London Bridge welcomed 255,000 visitors during the London Olympics, according to the Swiss authorities. 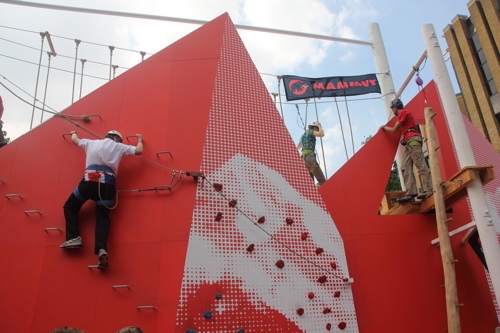 During the three weeks that the Swiss took over Glaziers Hall, Cathedral Square and Southwark Cathedral's Millennium Courtyard, around 3,000 people tried out the climbing wall and 35,000 sampled the food and drink served by Mossiman's.

"The House was an extraordinary operation," said Nicolas Bideau, head of Presence Switzerland, an agency of the Federal Department of Foreign Affairs, which has spent almost Ł3 million on the project.

"I believe the Swiss Red Zone will remain in the memory of many.

"The aim of the official Swiss presence at London 2012 was to offer a home away from home to the athletes but also to show the many faces of Switzerland.

"As far as the objectives for the target audience abroad are concerned, we have managed to entertain hundreds of thousands of British and international visitors and we could communicate lesser known strong points of Switzerland."

The House of Switzerland may have been dismantled but the Swiss will retain a presence in Southwark for the Paralympic Games – a "fan zone" will open at La Cave restaurant from 30 August.