Prince of Wales at Glaziers Hall for Craft Skills Awards

The Prince of Wales visited Bankside on Thursday to present the inaugural Craft Skills Awards. 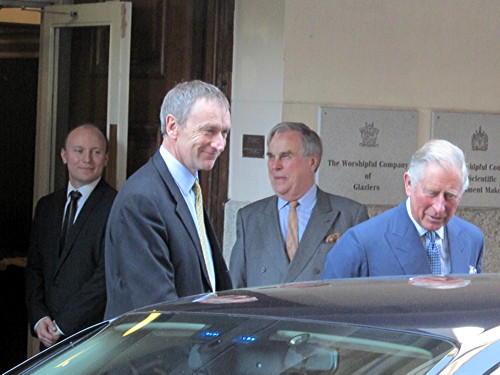 The Prince of Wales leaving Glaziers Hall on Thursday

The Craft Skills Awards have been set up to recognised excellence in teaching, maintaining and developing traditional skills.

"I have long done what little I can over the years to champion the craft sector, both through my own charities and through my patronage of other organisations," said Prince Charles.

"I have a particular interest in heritage craft, and have sought through my own charitable work – particularly, through The Prince's Trust – to help preserve traditional crafts and to encourage young people to pursue them as a livelihood and a vocation – in part because of course the pursuit of a craft is a marvellous way for somebody to realise their true potential as a human being."

The winners included Clayground Collective (Duncan Hooson and Julia Rowntree) who received the award for engaging new and diverse audiences.

Duncan Hooson is head of ceramics at Morley College in Waterloo and last year's Marathon Make project held at Morley Gallery formed part of the application.

A large crowd gathered in Montague Close to catch a glimpse of the Prince as he left Glaziers Hall.