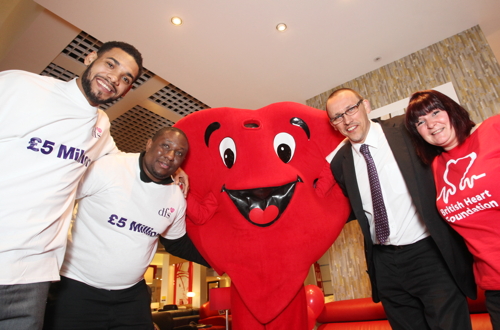 The training is aimed to help give people the best chance of survival if they suffer a cardiac arrest in or around the DFS store.

More than 30,000 people suffer cardiac arrests outside of hospital every year in the UK. But less than one in ten survive, often because people don't have the skills or confidence to perform CPR.

80 per cent of out-of-hospital cardiac arrests occur in the home, meaning people are often forced to perform CPR on a loved one.

Across the UK, DFS has helped raised more than £5 million for the British Heart Foundation through its sofa donation project since the initiative launched in May 2012.

The scheme allows customers buying new a new sofa from DFS to have their unwanted sofa collected for free by the British Heart Foundation to be sold by the BHF in one of its 165 Furniture & Electrical stores like the one in in Old Kent Road.

Peter Carman, senior sales manager at DFS Old Kent Road, said: "We're really proud of our relationship with the BHF and it's down to the generosity of that our customers that we've been able to raise £5 million.

"We also want to bring attention to the Nation of Lifesavers cause so that people in Old Kent Road have the best chance of survival if a cardiac arrest strikes.

"Training can significantly cut the amount of time a cardiac arrest sufferer has to wait for life saving CPR, giving them the best possible chance of survival."

Judy O'Sullivan, assistant programme director at the BHF, said: "Knowing how to react when you're faced with a cardiac arrest can mean the difference between life and death. Through the BHF, over three and a half million people have been taught life-saving CPR skills already, many of whom have gone on to use them in an emergency. We're delighted that DFS Old Kent Road has committed to train its staff in CPR as part of our fantastic partnership that has already raised £5 million for the charity."