Nearly five years after it was installed, the first trains have run across a new rail viaduct above Borough High Street and Borough Market. 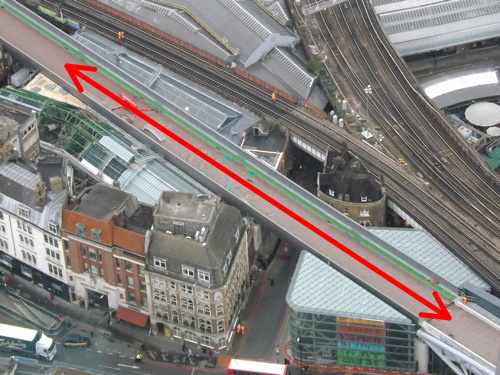 Borough Viaduct pictured in 2012 before track was laid 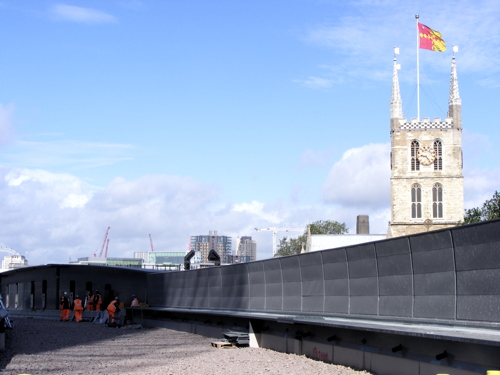 The line from London Bridge to Charing Cross via Waterloo East was closed for 10 days over Christmas and the New Year whilst the tracks on the new viaduct were connected to the existing tracks.

The new viaduct was built as part of the Thameslink Programme and will alleviate a notorious rail bottleneck.

Before the viaduct was built, all Southeastern trains to and from Charing Cross shared a single pair of tracks with the cross-London Thameslink services.

Thameslink Programme director Simon Blanchflower said: "I would like to thank passengers for their patience this Christmas and New Year while we brought our new viaduct and signalling system into use.

"With fewer passengers travelling than at other times of year, Christmas gives us the best opportunity to do this kind of major work.

"By opening Borough Viaduct, we have been able to take two existing tracks out of use for rebuilding, which is a crucial step in the ongoing reconstruction of London Bridge Station.

"Platforms alongside those new tracks are rapidly taking shape and we are looking forward to opening new station concourse in August this year."

Southeastern's managing director David Statham said: "The Thameslink programme is a major series of improvement works to rebuild London Bridge station and to improve the railway for passengers for years to come.

"The work that took place over the Christmas period to bring a new viaduct into use meant we were unable to serve some of our main central London stations for ten days.

"I would like to say that I am extremely grateful to our passengers for their patience while this important work was carried out."

Charing Cross trains are now running across the new Borough Viaduct, which was put in place in 2011.

"Those trains have been running through London Bridge without stopping since January 2015, but when the first half of the new London Bridge concourse opens after August this year, those services will begin calling again, using brand new fully-accessible platforms.

At the same time, Cannon Street trains will begin running through London Bridge without stopping, as their platforms will be taken out of use for rebuilding.

Borough Market traders on the move

The new viaduct may be open for trains, but Network Rail is continuing to work on the bridges across Borough Market.

The Green Market and the Market Hall will be closed for the next three months, with traders relocated to Jubilee Place on Winchester Walk.