Satellite TV company Sky has become one of the biggest corporate backers of the controversial Garden Bridge across the River Thames. 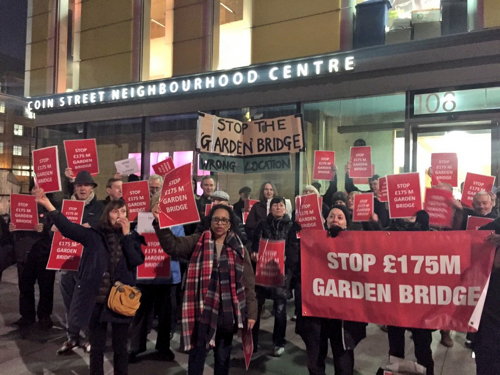 Sky has made one of the biggest single private donations to fund the creation of one of the large gardens on the bridge, which will be named by the company.

The bridge – designed by Thomas Heatherwick – is due to link the South Bank with Temple underground station.

Joanna Lumley – who devised the project – told Sky News on Wednesday that the bridge will be "a gift to London" which will enable Londoners to enjoy "views that will knock your socks off".

The value of Sky's contribution has not been disclosed by the trust but the Evening Standard reports that the donation is "thought to be worth around Ł5 million".

"We are delighted to support the Garden Bridge," said Jeremy Darroch, chief executive of Sky.

"The project will enrich London, helping us to give back to the city where Sky was founded over 25 years ago and remains headquartered today.

"The Garden Bridge will create a beautiful and tranquil space for us all to enjoy, and will become an iconic landmark in the heart of our capital city."

Lord Davies, chairman of the Garden Bridge Trust, added: "We are delighted to have the support of Sky, which plays such a major role in UK culture.

"The Garden Bridge Trust has huge support as this announcement demonstrates. It is thanks to the support of so many donors that this world class project and imaginative green space is coming to life."

The trust says it has now raised Ł145 million of the Ł175 million cost of the bridge.

That Ł145 million includes Ł40 million of public money from the Treasury and Transport for London, as well as a Ł20 million loan to be repaid over 50 years.

Just before Christmas Mayor of London Boris Johnson was grilled by London Assembly members at a meeting of the GLA Oversight Committee.

In ill-tempered exchanges Mr Johnson claimed that the bridge's opponents were spouting "opportunistic claptrap" and complained that Joanna Lumley was "having her name dragged through the mud" by assembly members probing the procurement process for the river crossing.

"I think we need to get on and build this bridge," said the Mayor, dismissing assembly members' questioning as "a load of cobblers".

The Mayor also confirmed that he had flown to San Francisco in 2013 for a 24-hour round trip in a failed attempt to secure sponsorship for the bridge.

Last month Lambeth's planning applications committee approved the discharge of a number of conditions attached to the planning permission for the bridge, including the construction logistics plan and the tree removal plan, which proposes the net loss of 25 trees on the South Bank.

In December members of the Thames Central Open Spaces campaign (TCOS) held a protest outside a meeting of the board of Coin Street Community Builders. CSCB could block the bridge if it refused to cooperate with Lambeth council in the granting of a new lease for the land on the South Bank where the bridge will have its southern landing.

The Garden Bridge Trust has also announced a new partnership with the Oasis Academy South Bank free school to use the bridge as an educational tool for local students.

Oasis Farm Waterloo and the trust will also share seeds and plant cuttings to help stimulate biodiversity and use in horticultural education.

Oasis founder Steve Chalke said: "We are very excited to be involved in the creation of the Garden Bridge and the brand new educational programme, which will give the students the opportunity to experience career options inspiring them to do great things when they leave Oasis Academy South Bank."

What do you think of Sky's donation to the Garden Bridge?