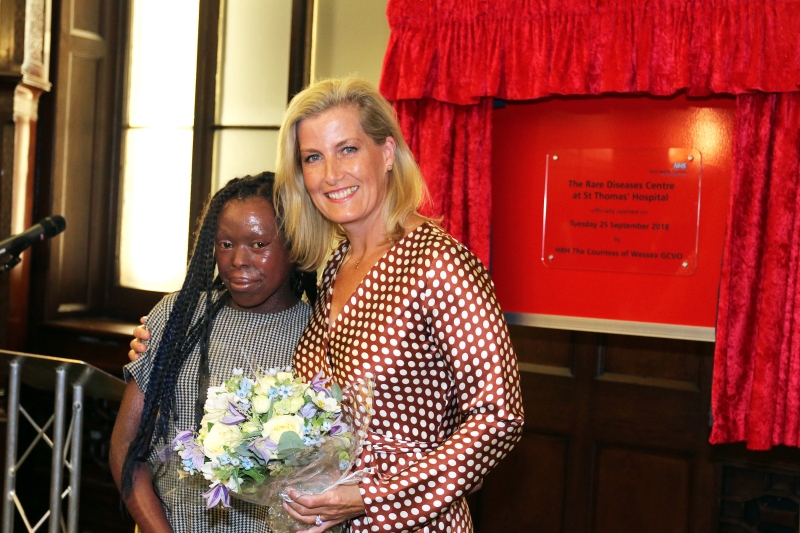 The Countess met patients who have benefited from the opening of the centre as well as the doctors and nurses who work there.

She heard how the centre was designed specifically for patients with a number of complex rare genetic conditions, and that it has transformed the experience they have when coming to hospital.

The rare conditions treated at the Centre include epidermolysis bullosa (EB), a potentially fatal skin blistering condition which causes constant pain; xeroderma pigmentosum (XP), a genetic disorder affecting patients' ability to repair the damage caused by ultraviolet (UV) light, significantly increasing their risk of skin cancer and eye disease as well as related disorders of DNA repair; Bardet-Biedl syndrome (BBS), a genetic disorder that can cause blindness, obesity and kidney disease as well as affect other parts of the body; and ichthyosis, a family of rare genetic skin disorders characterised by dry, thickened, scaly skin.

The new centre brings together several specialist services in one place.

Most patients need to see a number of different specialists at every appointment because their conditions affect many parts of the body.

Before the new centre opened, patients were seen in separate clinics around both the Guy's and St Thomas' sites, which meant that they had to spend time travelling between appointments.

The Countess, who is patron of the national EB charity DEBRA, which helped to fund the new facilties, was given a tour of the centre. She was told how its features have been tailored to meet the needs of the patients.

For example, it is UV-free for XP patients, has furniture with curved edges so that it does not catch on fragile skin and includes flooring and wall colours specifically chosen based on feedback from visually-impaired patients.

The centre also contains a comfortable communal space for patients to wait between appointments, which does not have a typical clinical environment. The area has a forest-themed feature wall – the idea of this is to bring the outside world in, as some patients may not be able to go outside much due to their conditions.

Work is also under way on a new sensory garden located outside the centre, which will offer patients a quiet haven to reflect, socialise and relax when it opens later this year.

After a tour around the centre, Her Royal Highness unveiled the plaque which will be displayed there. Speaking at the unveiling, the Countess said: "It is a huge pleasure for me to open the Rare Diseases Centre. The testimonies we've heard from the patients with different rare conditions make it clear why this was so necessary."

Sir Hugh Taylor, Chairman of Guy's and St Thomas' NHS Foundation Trust, said: "We are incredibly proud to have this wonderful facility which is making a real difference to patients, many of whom are cared for by our clinical teams throughout their lives and have frequent hospital appointments.

"It was a real privilege to introduce the Countess to the hard-working staff based in the Rare Diseases Centre and the patients whose lives we are helping by listening to their needs and ensuring we are treating them in the best possible way.

"We are very grateful to the patients who were heavily involved in designing the centre, the generous funders who made this possible and the dedicated staff who have worked hard for years to make the facility a reality and who now ensure provide excellent care to this special group of patients every day. The Centre means that they now have somewhere permanent that they can call home."

The Rare Diseases Centre has been funded by Guy's and St Thomas' Charity, the charity DEBRA, the Four Acre Trust and the Photodermatology Charitable Trust.