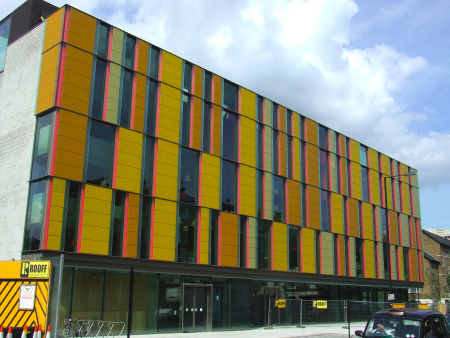 The centre includes a 64-place day nursery with 12-place creche; facilities to house Coin Street's community programmes for families, young people and children; conference, meeting and event spaces for hire; offices for Coin Street staff and a roof terrace with views across the London skyline. Later this year a restaurant will open on the ground floor.

"We would like to thank the design team including architects Haworth Tompkins and the main contractor Rooff who delivered this beautiful building on time and on budget," adds Tuckett.

"The architects worked with visual artist Antoni Malinowski who is responsible for much of the colour within the centre particularly the multi-coloured southern facade, which is already becoming a recognisable landmark on Stamford Street."

A year ago the same architects – Haworth Tompkins – won a RIBA award for their rebuild of the Young Vic theatre in The Cut.

The refurbishment of the Royal Festival Hall and surrounding public areas won a new award, The London Public Space Award, presented by Design for London and RIBA London, and a RIBA Arts and Leisure award.

"I am delighted that we have won two RIBA awards for the tremendous success of the refurbishment of the Royal Festival Hall and the relaunch of the site as a whole," says Southbank Centre chief executive Michael Lynch.

"We have created a buzzing commercial and cultural precinct with new walkways and public squares that is being enjoyed by 62 per cent more visitors to the site. It gives me particular pride for the site to be acknowledged for the fantastic urban public space that has transformed the area.

"The success of the site is testament to the many organisations involved in the project – in particular, the Royal Festival Hall architects Allies and Morrison, contractors ISG InteriorExterior and Skanska McNicholas, as well as Rick Mather Architects, the masterplanners for the site and Gross Max, the landscape architects.

"This is a great accolade as we approach the first anniversary of the reopening of the Royal Festival Hall in June and a huge tribute to all the people who worked in bringing the project to fruition."