Nando's is to open a new restaurant on the ground floor of the Coin Street Neighbourhood Centre in Stamford Street - but it has applied to Southwark Council for an alcohol licence even though the premises are in Lambeth. 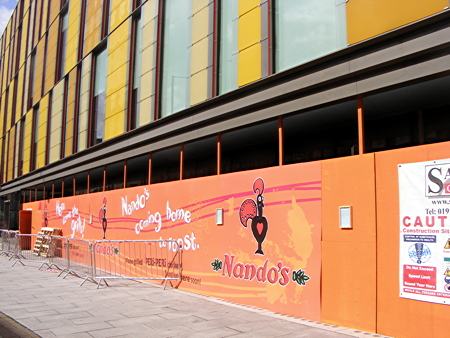 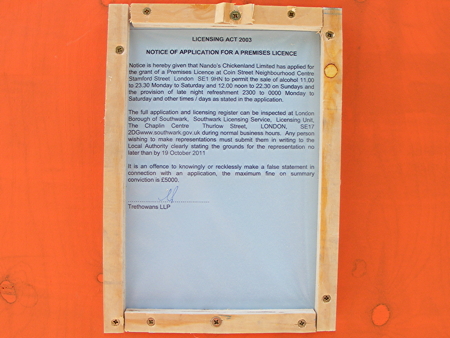 The restaurant space on the ground floor of the building has been vacant since the neighbourhood centre opened four years ago. The centre includes a nursery and other community facilities as well as offices for the staff of Coin Street Community Builders.

Now the Nando's chain has started fitting out the space for a new restaurant it hopes to open in November.

Nando's – best known for its peri-peri chicken – has its origins in South Africa and its menu has Portuguese and Mozambican influences.

As you would expect Nando's applied for a premises licence to enable it to serve alcohol. Unfortunately it submitted the application to the wrong council: the neighbourhood centre is in Lambeth, 200 metres from the borough boundary.

Last week the Boundary Commission published draft proposals to move the northern tip of Lambeth into the Bermondsey parliamentary constituency but there are no plans to change the local authority boundaries.

Licensing officers at Southwark Council failed to notice that the premises were outside their jurisdiction and processed the application anyway, displaying the details on the authority's online register of licence applications.

Nando's also displayed public notices around the restaurant inviting local residents to send any representations about the licence application to Southwark Council.

The restaurant also took out an expensive advertisement in the South London Press with details of the erroneous licence application.

A Southwark Council spokeswoman said that the authority had not yet banked Nando's cheque for the licence application fee so it would not need to issue a refund. The application has now disappeared from the council website.

Nando's told the London SE1 website that it had instructed its solicitors to resubmit the application to Lambeth Council.

The new restaurant will be Nando's third in SE1: it has existing branches at Elephant & Castle and Bankside.