Waterloo Library in Lower Marsh was closed on Tuesday as staff went on strike in protest against Lambeth Council's plans for major cuts. 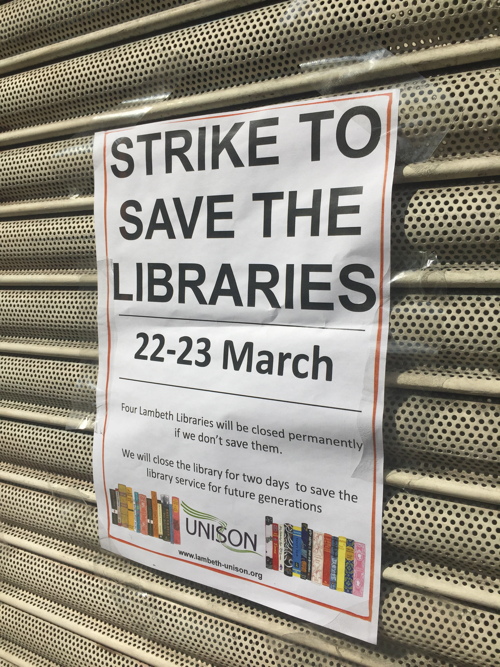 Lambeth Council wants to shut Waterloo Library in Lower Marsh and move books – but not the staff – to a temporary facility at the nearby Oasis Centre.

Waterloo Library was due to close on 1 April but the council recently confirmed that the Lower Marsh building will stay open until the temporary space at the Oasis Centre is ready. The move could take place in early June.

The Bishop's ward Labour councillors Jennifer Mosley, Kevin Craig and Ben Kind have welcomed the short stay of execution for the existing library. They said: "As the three Labour councillors who fought hard for continuity in service we are delighted that library provision will remain open in Waterloo.

"We would like to thank Cllr Jane Edbrooke for listening to our concerns and who has had a difficult job to do in this consultation.

"A big thank you also to Steve Chalke at Oasis for housing the interim library. We look forward to the plans, development and eventual opening of our exciting new library building."

Once the library moves out, the Lower Marsh building will become a 'meanwhile space' for the next two years, pending redevelopment.

The strike action continues on Wednesday at other Lambeth libraries but Waterloo Library is not normally open on Wednesdays.

Librarian and Unison steward Tim O'Dell said: "Councillors hoped they could push things through quietly but they've got a fight on their hands – the community are preparing legal action and have organised a major campaign – and we, the staff, are taking the only action which we can – to strike. We have just three weeks before they start removing books and padlocking doors. They can't be allowed to give away our libraries."

Celebrities including Joanna Lumley, Will Self, Jay Rayner and Mark Rylance have spoken out against Lambeth's controversial 'Culture 2020' plans which include creating gyms in two libraries.

The council recently rejected a proposal by the borough's own libraries boss Susanna Barnes to create a 'staff and community mutual' that would keep all the library branches open.

Cllr Jane Edbrooke, cabinet member for neighbourhoods, said: "I understand the frustrations of those working at our libraries, but we have put together a plan that keeps the majority of our libraries open, under severe budget pressure.

"No viable alternative exists to our plans and it is clear that Lambeth UNISON are engaged in a political campaign alongside libraries groups rather than simply an industrial dispute, which is unfortunate and unhelpful.

"I know these changes are difficult and that no-one wants to see services cut – but this is reality we face with significant budget cuts from the government."