Firefighters were called to pump water out of St Mary Overie Dock on Tuesday night as floods threatened to damage the replica of Sir Francis Drake's Golden Hinde ship. 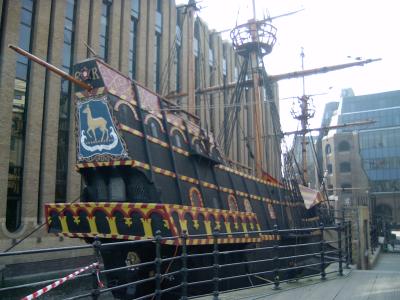 The Golden Hinde is currently being restored as part of preparations for the Queen's Diamond Jubilee River Pageant and St Mary Overie Dock has been drained of water.

Firefighters from London Fire Brigade were called just before 9.45pm on Thusday night last night to reports that the 'dry dock' was leaking.

There were fears that the ship's mast, sail and rigging, which were in the dock, could be damaged if flood water continued to leak into the dock, especially given that a high tide was expected just before 1am.

Station Manager, Simon Tuhill, who was in charge of the incident, said: “We were well aware of the historical significance of the Golden Hinde so firefighters worked incredibly hard to pump water away from her in order to keep her safe.

“We were also aware that the ship will play an important role in the Queen’s Jubilee flotilla on the Thames, which made our work even more vital. I think it’s fair to say, our hard work played a part in keeping the Golden Hinde safe and ready to sail another day.”

Flood water reached a height of two metres, but firefighters managed to pump away a substantial amount of water and left the scene at about 1.15pm. One fire engine and five firefighters were at the scene.