Lambeth Council has confirmed that it is seeking a 'community partner' to run a library in Waterloo if plans to close and sell the existing library on Lower Marsh go ahead. 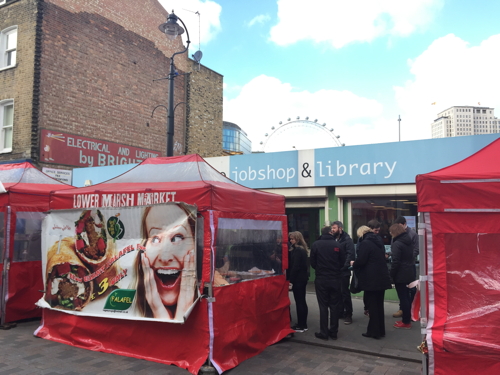 Waterloo Library is in the heart of Lower Marsh Market

At the end of last month Lambeth Council launched a public consultation on its plan to shut Waterloo Library and sell the valuable Lower Marsh site it occupies.

Campaigners from the Friends of Waterloo Library collected petition signatures in Lower Marsh on Saturday during National Libraries Day celebrations and a public meeting has been called for this Wednesday evening to discuss the future of the library.

A Lambeth-wide 'save our libraries' petition has now gained nearly 800 signatures.

After the meeting, Cllr Edbrooke said: "We want to be clear that our proposal for Waterloo expects to see a new library service provided and there have already been a number of suggestions from local organisations on where a new library service could be, which we will consider once consultation is complete in April.

"Under our proposals the Ł10 million community library fund, established in part through the sale of Waterloo and Minet library buildings, would contribute money to run the new service and we're also proposing a one-off Lambeth Library Challenge Fund for Waterloo to help create a brand new library and community space to house the library service.

"We know that library use in Waterloo is currently low despite a high street setting.

"However, we hope that by exploring a new model with a local community partner we'd see an increase in library use and be able to better support literacy and a love of reading.

"I would like to thank the three Bishop's ward councillors for the passionate and constructive way in which they have so far represented their community in recent discussions."

Cllr Kevin Craig said: "What is actually needed now is for people to realise that there are options on the table for a replacement library – talked about for years – and we now need people to lend their support to this – not to a spurious campaign where the same Lib Dems that are subjecting our local authority to massive spending cuts at the same time moan about the library being sold."

The Bishop's ward councillors have launched a new website www.keepalibraryinwaterloo.com and an online petition seeking a guarantee from their Labour colleagues that there would be no gap between the closure of the existing council-run service and the opening of a new community-led library.

On their campaign website, the councillors say: "We have already won commitments from Lambeth Council that there will be a library in Waterloo – maybe rehoused in the old library building at Waterloo Action Centre or maybe exciting plans being brought forward by Oasis Academy which would see a new building on Lower Marsh or maybe plans from someone yet to come forward."

Are you reassured by Cllr Edbrooke's comments?