An embroidered triptych depicting City and Southwark landmarks - which took 4,000 hours over four years for four men in two prisons and one former prisoner to make - has been unveiled at Glaziers Hall. 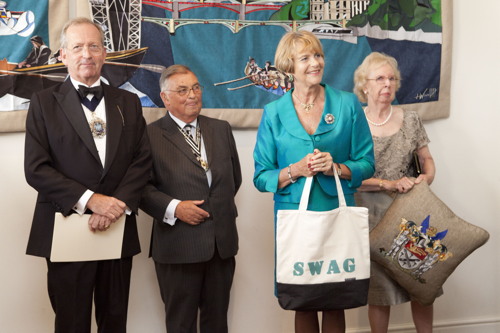 The Lord Mayor of London with Peter Doe, the Lady Mayoress of London and Liveryman Janet Doe

The embroidered wall hanging featuring City, Southwark and Lambeth buildings was unveiled at Glaziers Hall on Monday by the Lord Mayor of London Alderman Alan Yarrow and dedicated by the Very Revd Andrew Nunn, Dean of Southwark.

Entitled 'Stained Glass in Stitches', the colourful triptych wall hanging features landmarks such as Tate Modern, the London Eye, Tower Bridge, Southwark Cathedral and The Rose window of Winchester Palace – as well as Glaziers Hall itself.

The wall hanging was commissioned by Peter Doe, past master of the Worshipful Company of Glaziers and his wife Liveryman Janet Doe and will be displayed at key ceremonial events held by the livery company.

'Stained Glass in Stitches' was designed by Helen Whittaker, one of the country's leading stained glass designers and makers, and produced in modern machine embroidery by Fine Cell Work, the prison embroidery charity.

Measuring 6.5 metres by 1.5 metres, the wall hanging is composed of hundreds of appliquéd fabric pieces precision-stitched onto linen.

It took 4,000 hours over four years for four men in two prisons and one former prisoner to make, and was made using a computer-linked embroidery machine funded by another livery company, the Broderers' Company.

"Having heard Katy Emck talking about Fine Cell on Radio 4 one morning and then visited a Fine Cell work sale at Leathersellers Hall where we saw the wonderful stitching done by inmates, we were inspired to commission this stunning wall hanging, designed by stained glass artist Helen Whittaker, for the Glaziers Company, to be displayed in the River Room at Glaziers Hall," said Peter Doe.

Katy Emck, founding director of Fine Cell Work, said: ""No wall-hanging to date, has so extensively used such modern embroidery techniques on such a scale."

Clive, a former prisoner who worked on the project, said: "Working with Fine Cell Work has helped me to change my mind-set – being useful within the community – also for the clients.

"They know you've been in prison and they treat you as normal. They don't judge you – they praise you for your work. That gives you back your self-esteem."