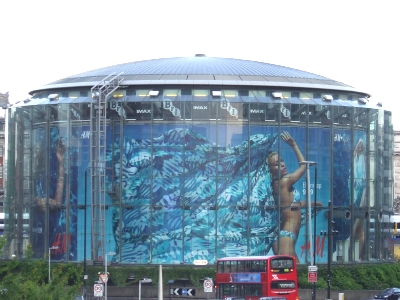 Britain's biggest cinema screen opened in 1999 at Waterloo's Bullring. It took just a year to transform the desolate roundabout at the end of Waterloo Bridge and within the first 12 months it is estimated that half a million people visited the new attraction.

Canadian-founded IMAX corporation has opened 180 cinemas but the £20 million Waterloo IMAX, part funded by National Lottery money, has the most sophisticated motion-picture projection system yet. The 26mx20m screen is the height of five double-decker buses and the 482-seater auditorium has digital surround sound.

The London IMAX is part of the British Film Institute which screens feature films, shorts and television programmes to audiences at the nearby BFI Southbank.

Until 2006 the outside of the IMAX building featured a mural by Howard Hodgkin. Amid some controversy the building is now used as a giant advertising billboard.